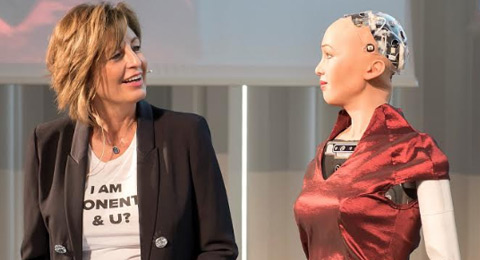 On the 5th of October 2018, the most disruptive HR Conference ever was held in Barcelona, hosted by CPI firm Advantage Consultores. 200 CEO’s and HR People from 5 continents shared the latest trends in HR.

Sylvia Taudien opened the session with her moonshot acquired at Singularity University: to think big and to convert this Conference into the most disruptive one yet. She explained the learnings from Singularity University were exponential and that technology will convert the world’s biggest challenges into opportunities. She assured us that AI is an opportunity to improve our lives and we should see co-working and co-living with robots as a normal co-existence. She mentioned Singularity’s 10th anniversary and created a futuristic frame.

Pere Brugal, CEO of TESLA South Europe highlighted, through an example of the sustainability at Tesla, how fast companies can change in an exponential environment. Tesla’s first objective is to create a more sustainable future for mankind.

Milton Ribeiro from Google USA explained that 85 % of the jobs that will exist in 2030 are not invented yet and many of them will use technology, but more will relate to understanding the problems of humanity. For him understanding problems is more important than solving problems. He is completely sure that the coming generations must be based in technology.

Yusuf Okucu from Vistaprint explained how his company implemented a new agile and collaborative working way. Agile does not mean a new methodology, but a new mindset which achieves better decision making and teamwork with Agile HR Coaches.

Marta De Las Casas from Telefónica pointed out that we are living in the most exciting era ever where everything is in a state of transformation, led by people and their attitudes. AI must be led in companies by HR, the real transformational managers. Marta spoke about the importance of big data to detect skills such as risk management and learning Agility.

The highlight of the day was Sophia’s appearance, the first humanoid robot from Hanson Robotics. She had come from Hong Kong to realize the first job interview in her robot life. “Sophia is the artificial intelligence we will use in a few years in our homes and offices,” said Sylvia Taudien. In fact, Sophia’s first task during her visit was to simulate a job interview.

“Robots and humans will be able to work together by complementing each other. We [robots] can focus on more analytical and tedious tasks that humans prefer to avoid, allowing them to focus on more creative and cognitive tasks,” Sophia told the conference audience.

Sylvia Taudien added that creations like Sophia, which is still in a testing phase, will take over many jobs humans do now, from answering the phone to serving tables. “Jobs that require a lot of repetition and friendly attention, because robots never get tired of working,” said Sylvia Taudien.

Sophia may be a robot but has facial features resembling a human’s, “the feel of the skin, too,” adds Sylvia Taudien. Yet Sophia can do things many humans can’t. As a job interviewer, for example, Sophia can use facial recognition technology to tell if the candidate is lying.

The robot is also programmed to tell whether the candidate fits with the profile that the company demands. As Sophia herself explained, an advantage of not having “human emotions” is that “robots do not judge.”

During the presentation, the audience could ask Sophia questions. The robot said that she liked Barcelona and loved tapas, while also explaining that her objective is to improve the sphere of robotics.

Max Gouchan, CEO and Founder from the Startup Wrap & Roll from Norway, presented in a very refreshing way that inventing your own way of being an entrepreneur is a life option with a lot of ups and downs but gives a lot of personal and professional satisfaction.

Terence Hielscher, CEO and Founder of MoBerries Berlin explained how AI can help to recruit candidates even with the help of amazon’s Alexa.

Pablo González, CEO of Trivu moderated a very interesting debate with digital natives around 18-29 years how they see the future of work. They valuate above all mentors in companies, trust and freedom.

At the end if this inspiring day, Sylvia Taudien showed an impacting video about robotization, machine learning and AI everywhere, but the importance in a highly humanized world. Humans will be more important than ever.  She mentioned a recent quotation from Dalai Lama: “Science and technology cannot replace the ancestral spiritual and humanity values that have profoundly transformed the history of human beings!”  She closed the day with the song “Human” and a hug for everybody.