Coaching for executives, managers and specialists

The term “coaching” is used as a generic term for different methods of temporary support and guidance for executive managers and employees.

In contrast to “consulting”, no solutions are suggested by the coach, rather the development of own solutions is facilitated. “Coaching” refers to structured conversations between a coach and a coachee (client), e.g. on questions of everyday professional life. The goals of these conversations range from the assessment and development of personal competencies and perspectives to suggestions for self-reflection and overcoming conflicts with employees, colleagues or superiors.

The coach acts as a neutral, critical sparring partner and, depending on the goal, uses methods from the entire spectrum of personnel and management development. He promotes the ability for self-management (help for self-help).

Coaching differs from (psycho)therapy in that in the latter a medical diagnosis is made by an “expert” and emotional problem reactions are dealt with in a longer period of targeted change work.

When is coaching used?

Coaching is used in many areas, e.g. in sports, in medicine or in private life. In the work environment (private and governmental organizations) coaching is used especially for performance improvement, competence development, conflict resolution, and in leadership. The advantage of coaching is that it can be used in a short-term and targeted manner. Therefore it can be used very widely depending on the topic.

Coaching is considered useful in the following topics in the work environment:

In the personal field:

In the organizational field:

Coaching as a personnel development measure makes it possible to respond to the coachee’s individual needs and to support him/her in a situation-specific way and to help him/her move forward. The coach fulfills the function of a “mental catalyst”.

The forms of coaching can be divided on the one hand according to the approach:

Classic coaching describes a situation in which the client has a coach available for a certain period of time to work on situational unpredictable topics of everyday work (without having agreed on specific topics or objectives beforehand).

In contrast, theme-centered coaching focuses on a specific pre-agreed issue, although other issues may be addressed. It is also often scheduled for a shorter period of time. On the other hand, the forms of coaching can also be structured according to the number of people and the topic:

In this type of coaching, a single client is coached. The popular one-to-one coaching is often (incorrectly) equated with coaching a manager by an external consultant. However, one-to-one coaching can also be used for staff and by internal line coaches and supervisors.

In this type of coaching, several clients are coached. The generic term group coaching also includes the variants of team coaching or system coaching, and project coaching. The size of the group usually does not exceed 15 coachees.

This type of coaching is a special form of team coaching, in which a project team is coached. The project team usually consists of people from several departments and hierarchy levels, who work together for a limited period of time and only for a special task with a strong focus on performance and goals. In project coaching, in addition to the technical topics of the project management process, topics such as cooperation and temporary project roles are also coached.

The coach as sparring partner

The coach does not impose his own ideas and opinions on the client, but should always take an independent position. The coach is not the “doer”, but a neutral feedback provider and sparring partner. Under no circumstances does s/he impose his/her own values on the client.

Rules of the game (psychological contract)

The coach works within the framework of previously agreed “rules of the game”, which the client – like the entire coaching – accepts voluntarily. The basis for this is a personal relationship with the client(s) based on trust.

Coaching can only work under clear rules of the game that are understood and accepted as meaningful by the client. This “psychological contract” clarifies the rules of cooperation (coach and client should “match” in these terms), the client’s critical faculties, the willingness to critically question one’s own values, the extent of problem awareness, expectations, pre-assumptions, fears, the total duration and possible goals, approaches and methods used, the extent of desired change, boundaries and “taboo zones”. 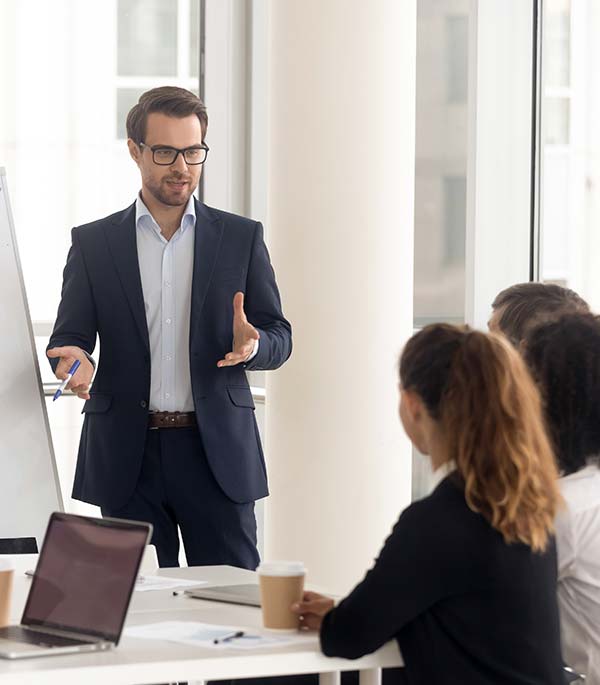 Often there is also an additional person involved in the coaching: the supervisor. Especially if he/she has initiated the coaching, a joint goal-setting session is often held to develop the same understanding of the issues being addressed for all parties involved.

How does a coaching meeting work?

The procedure is to enable the “client” to organize him/herself through feedback, self-reflection, planning and training (principle of self-management). This includes the steps of autonomous goal setting, independent planning and organization up to self-control (result or progress control) with regard to the implementation of the self-set goals (implementation competence).

What is employee coaching (employee development)?

The trend in leadership and organization is moving away from a strongly hierarchical order to an agile organization with decentralized decision-making structures.

By increasing the personal responsibility of employees, promoting self-learning and through coaching programs, there is a step-by-step increase in vertical development – and thus an overall strengthening of the company.

By recognizing and promoting their potential, employees feel valued as persons and perceived as competent. This promotes motivation and a positive attitude toward the employer, which in turn benefits the entire company.

What are the strategies for personnel development?

Many large companies today rely almost exclusively on coaching, because it allows specific challenges to be solved in a targeted manner in the short term. The classic strategies for personnel development are: 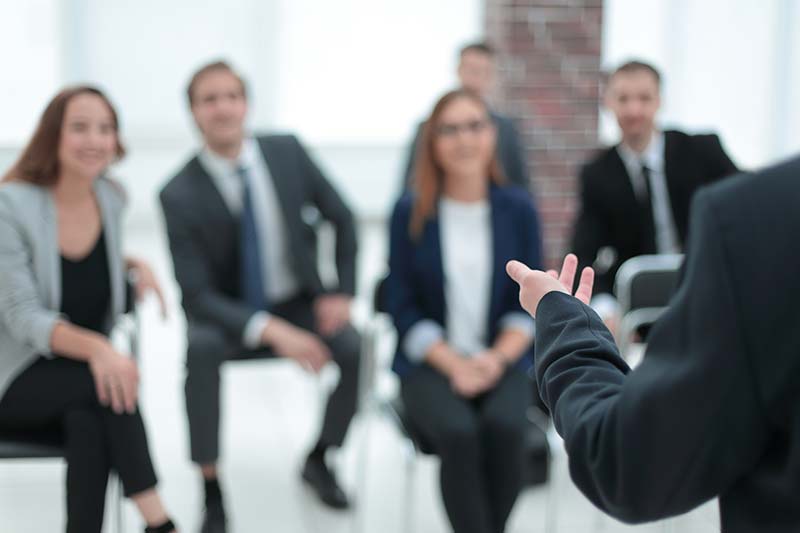 The coaching for employees focuses on the

In individual cases, coaching can be a measure to prevent a dismissal. Particularly in the case of poor performance or conflicts, coaching individual persons can solve the problem and thus prevent an expensive dismissal and new employment.

In the case of groups of people, coaching in the framework of career development (career management) can also prevent a staff reduction. Especially the case in a change process due to a change in strategy, this can be achieved by addressing the changes in competencies and a change in culture at an early stage and by anticipating them through personal development. This saves the employer the costs of staff turnover (loss of operational know-how, on-boarding costs, etc.).

What is executive coaching?

Leaders are part of the management and lead one or more employees. The essential difference to other employees lies in this leadership task. Therefore, executive coaching focuses on leadership competence and leadership behavior. Often three levels of responsibility are distinguished:

because the management task develops as a function of the number of employees. 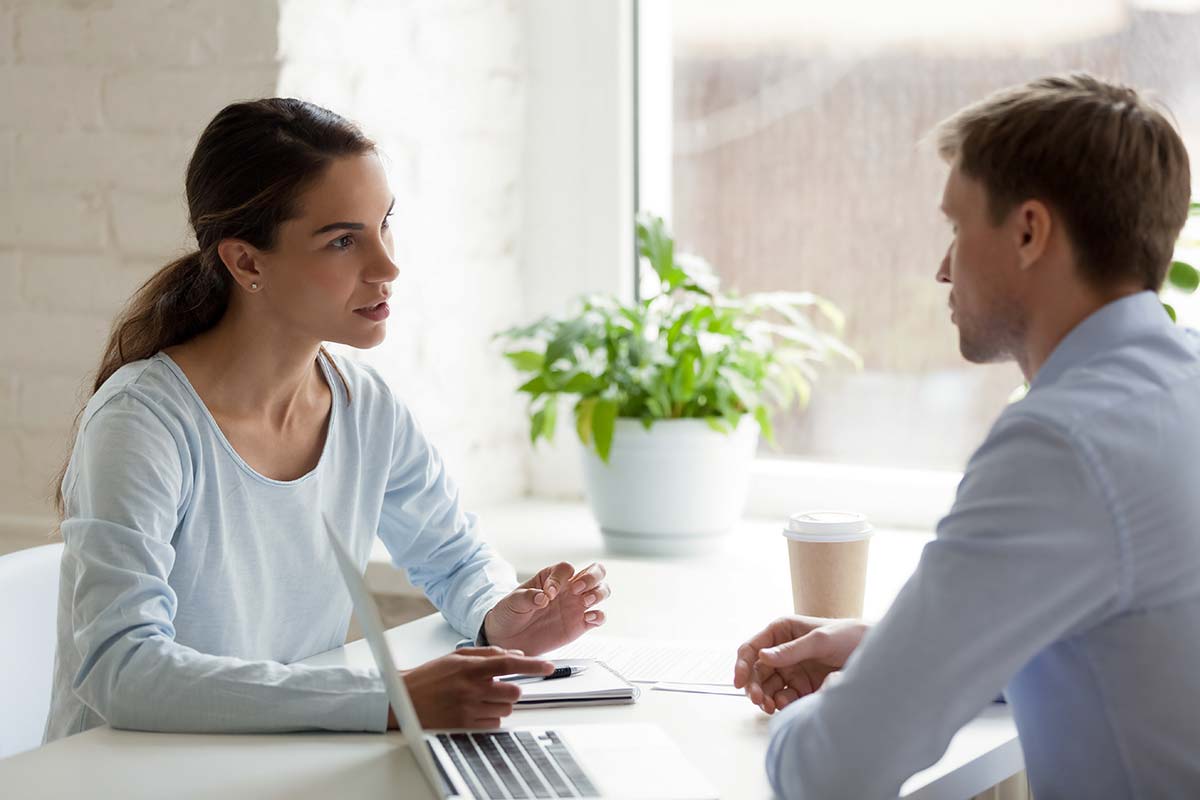 What is meant by leadership competence?

Leadership competence is the ability to set goals and to influence and lead the behavior of other people in such a way that these goals are translated into results. As a leader, you have an influence on the performance of your team, e.g. through the motivation of your collaborators and the working atmosphere in your area of responsibility. The team must therefore perform its day-to-day tasks in the best possible way so that you can achieve the goals against which you are measured. In the context of these tasks, the following competencies are important:

What motivates someone to be a leader?

Behind the motivation to become a leader there is often the reflection on professional development opportunities and thus the consideration of the own career. It is also curiosity and interest in the new task and the financial incentive.

The motivation to be and remain an executive mostly resides also on career and financial considerations.

However, for many executives, interest in the task, with the possibility of “making a difference”, is an important motivation.

How can someone become a leader?

Promotion to manager often has a fundamental flaw. The person is functionally given the role of a supervisor, but is not prepared or trained for this role, especially in small companies. It is in these situations that coaching can be very valuable.

The 10 most common mistakes as a leader

What is the process of executive coaching? 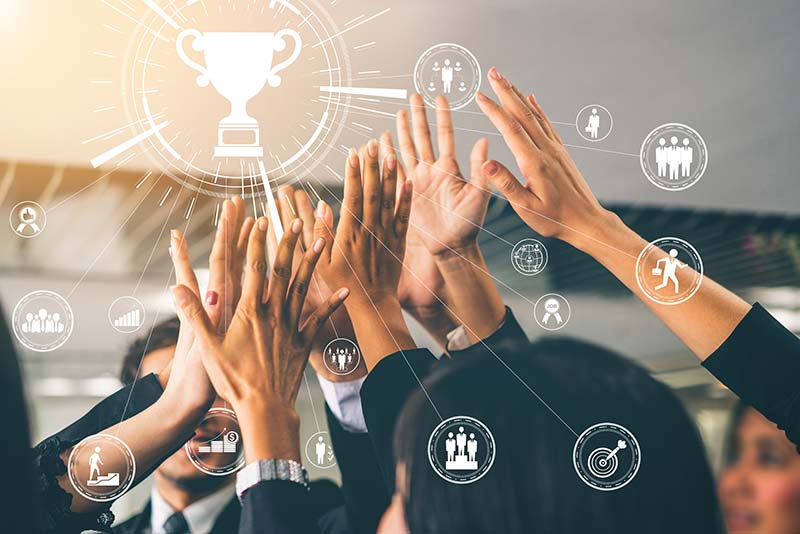 The main phases of coaching include (1) clarification of the initial situation, (2) goal setting, and (3) interventions.

Differences between employee and executive coaching

Here you will find a comparison of these two types of coaching.

Qualification of the coach with appropriate thematic background and experience

Qualification of the coach with education, appropriate curriculum (own leadership experience) and experience with the target group.

What does an employee or executive coaching cost?

The price of a coaching consists of different elements. Basically, the qualification of a coach (education, own professional experience and experience in coaching with the target group) determines the hourly rate per coaching session. After that, frequency of sessions and duration of the program determine the total price.

Duration of a coaching session

Tips for the selection of coaches

For organizations that want to use coaching, it is important to find competent and suitable coaches. Here it is beneficial to work with a larger provider who can guarantee this quality. Below are some tips for the search and selection of coaches: